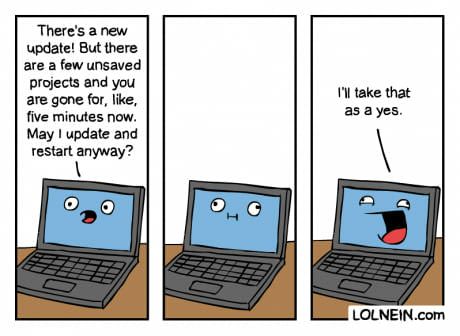 Another PC-platform booboo for me this week. I had heard that the latest Windows Update broke an element of the modding suite that I’m using to play FIFA20, but it was (I thought) an element that I wasn’t actively using, so I thought I’d be OK and didn’t pay any attention when I got the Update message – which I declined and forgot about.

Until my PC updated itself the next day while my back was turned. So I technically didn’t initiate the Windows Update myself – it all went down something like the image above. I popped downstairs to attend to something and when I came back the PC was happily rebooting after the Update.

I know there’s a Setting that I should have un-Set in order to prevent that happening. All done now. Too late, but it’s done now.

So I ended up playing a session of vanilla FIFA20, which has already happened to me for several sessions in the course of my FIFA20 PC adventure so far.

Vanilla FIFA20 was fine then, and it was fine now. Better than fine. Still a 9/10 experience even without the Career Mode Realism, Gameplay and Broadcast Camera mods in action. It won’t be long before I get them back but it really wouldn’t matter now if I had to play vanilla.

My tastes have changed. There was a time when my feeling of FIFA was that it was jerky and weird and ’empty’. I have to say that a couple of matches of FIFA19 that I have played recently still do feel like that – but that’s that game. FIFA20 is the best FIFA since FIFA15 for me, and perhaps ever.

But we shall see. The true tale of the tape of this FIFA will not be told until my End of Year Review in August… if there is an August. Things like days of the week and months of the year depend very much on a stable world system to make them make sense. Like everyone else, I’m watching in fascinated horror to see if everything is really going to fall over, or if it’s just teetering and will recover.

And perhaps that’s the drollest irony of all. After 13 years of this blog, I finally land on a FIFA that promises to keep me going for longer than a week or two – and bang, instant apocalypse.

Eh, we’ll see. All I can say is that it’s good to have football gaming.

I haven’t moved up the table very far. Still holdng in mid-table, still in sight of the leaders, coming up to mid-season.

Here I present a longish video that’s something different from the usual.

Most of the time with a footy game video, you know that a passage of play is going to end in a goal.

In this one, there is no such guarantee.

Here is a compilation of Misses and Howlers and Solid Goals. There is one Good Goal in there, by my reckoning (a header), but with most of these clips you do not know what’s going to happen until it happens. I could draw an obvious analogy with a certain ‘real world’ of our acquaintance, but won’t.

Updated twice-weekly on Tuesdays and Fridays.

What's the site all about? Check the Frequently Asked Questions.

Feel free to leave a comment on any post, or alternatively you can send me an email: peschronicles[AT] gmail.com

A Sevilla Case Of Something Or Other Punwise (6)

abbeyhill: you must have scored more than one long ranger per match sometime in PES2013 not-Greg,...
Chris99: There were definite angles in Sensible Soccer on the Amiga where you could almost...

Chris99: Sony has now delayed the PS5 event that was due to take place this week.
Uncle turf: Chris99 – I would have liked that one if there was such a feature. Think it...

Paul: Dan – Same as Abbeyhill here, I swap the shoot and cross buttons to mimic PES, and i...
not-Greg: Dan – I’ve been away from comments (NHS-adjacent job, and things slowly getting...

Tommy: nG – Sunk over 400 hours into Skyrim on the ps3 way back when, having picked up the...
Lloyd: All goals up to this season. Caught up at last. https://youtu.be/YBEAMsrsZNw